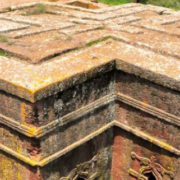 The chapel is called Bete Giyorgis and it is to be found in the foothills of the Simien Range in north western Ethiopia. This part of this land of emperors is arid and desiccated and yet pilgrims from across the interior travel enormous distances to be in this place. The region is called Lalibela…and it is beautiful.

Ancient Orthodox Christianity is said to have taken root in Northern Ethiopia around the 6th Century AD. In the 12th and 13th Century a series of ornate rock hewn sanctuaries were carved into the hillsides at Lalibela and these archaic and evocative buildings continue today to draw the faithful to worship.

The most iconic of these is Bete Giyorgis…named for Saint George. Upon arrival one descends a series of stone steps to the site. Red winged Starlings and Black winged Lovebirds call from the surrounding vegetation and Bearded Vultures ride the montane thermals above. Orthodox chanting by apprentice priests in the background gives the scene a raw and ethereal beauty.

From above Bete Giyorgis is shaped like a cross and is subterranean…carved from bedrock below ground level. To enter the sanctuary, one descends still further along a winding earthen tunnel passing wizened Ethiopian women shrouded in white as they answer the call to prayer. Once below one stands alongside the monolith surrounded by the steep walls of the soil profile. It is a church in a hole in the ground.

Shoes are removed and then one enters. The interior is refrigerator cold and gloomy. The hand-hewn windows are small. The rough rock floors are draped with burgundy coloured carpets. Tapestries adorn the walls alongside ancient engravings expounding the stories of the saints. Senior priests swathed in white cotton chant and genuflect in the tight, dark interior as a wave of claustrophobia descends.

One realises in the moment that one is witnessing something older than measured time…an unchanged faith and culture of belief emanating from a time before the written histories of this most magnificent part of the Horn of Africa.

What a team and what a privilege!

We were at The Johannesburg Zoo today to have a look at an installation in the African Wild Dog enclosure. RAE Safaris has sponsored this installation in conjunction with COAPE International as part of their zoo enrichment program.

Thank you Riaan and all at Reco Industrial Wildlife Management for the incredible construction work.

The device is essentially a pulley system that will simulate the movement of prey and will be the food delivery mechanism for these large, endangered canids.
We are resolute in our determination to improve the quality of life in captive wildlife populations as well as those occupying the ever dwindling wilderness regions of Africa. 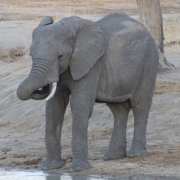 It was a winter bushveld afternoon like so many others. The immense sky was a stark azure indictment overhead and the surrounding landscape, desiccated and forlorn and yet still intoxicating in its quiet enormity. I was behind the wheel of our Landy and in the process of introducing first time African American visitors to my patch, my magnificent backyard, my Eden. I have always found it difficult, and many of my colleagues will agree, to truly ascertain the kind of deep spiritual impact that an African experience has on a newcomer. Society in the western world really expects us to at all times wear our “game faces” and nobody displays their heart on their sleeve anymore…it is not the done thing today it seems. On that particular afternoon I found myself battling the same quandary…the same internal struggle…are my clients getting this? Was Africa saying something to them?

And then we saw him… An enormous dust shrouded pachyderm striding up from the Limpopo floodplain below. The impact of his enormous feet launching smoke-like dust tendrils onto the languid afternoon breeze. He was slowly and inexorably joined by other elephant, all bulls of varying size and age until the count was seventeen. Seventeen galleon like colossi drifting through the Kalahari sand and rock as they have done on this continent since a time before man drew his first pictures on a rock face deep within the bowels of the earth. It was something fantastic to witness, something truly primeval, almost Jurassic in its obvious age and magnificence. I turned to look at my guests and I saw quiet tears on the face of the lady behind me. Tears that spilt unashamedly as she discovered and recognized her African heritage in that moment, as she recognized her connection to this ancient place and her heart began beating as one with the rhythm of primordial Africa. I rejoiced that day…quietly and completely as I was reminded of the profound beauty of this great place and its unquestionable power over us.

The elephant is truly an enigma. There has been more debate and disagreement, more controversy and political intrigue regarding the African elephant than probably all of the continent’s other wild denizens combined. What do we do with them? Here there are too many, there too few. Is the ivory trade a deplorable and despicable human industry or the useful sustainable money spinner financing national park management budgets? Do we cull them in Chobe and Tuli and Luangwa and Kruger where the gallery forests lie in tatters, ground zero to an elephantine holocaust? Do we dither with their hormones and sexual cycles in the vain hope that we might control their reproduction? My animal rights “friends” in Europe have all the answers of course…all of them built on an emotion riddled foundation in countries where nature is confined to tiny almost insignificant belts of green. We can’t seek answers here friends…nature has been usurped here and these organizations are out of touch with reality. Where do we go for the wisdom to decide the fate of this great beast, this grey behemoth? The elephant is the quintessential thread in an African tapestry. Africa without the elephant would cease to be Africa.

I have been moved more often and more completely by this massive, gurgling, lumbering monstrosity than just about any other component of the African savannah. I have tracked them, eaten partially digested marulas out of their droppings, been truly afraid as they have chased and harangued me when I have stepped too close. I have had intimate moments of reflection in proximity to these mighty creatures and have come closest to finding God in those moments alongside the great herds. They are wondrous and they have touched me and my clients in spiritual ways that I can scarcely begin describing with mere phrases. I have however also born testament to the devastation they have wreaked on parks throughout Southern Africa and I have been party to and witnessed their slaughter at the hands of my species.

I remember that afternoon well. The dust hung thick in the air and coated the back of my throat. My ears were ringing with the after effects of a great cacophony…a terrible and bloody death rattle. Warm arterial blood oozed thick and vital on to the talcum fine sand and soaked in. Everywhere large bodies were lying lifeless and obscene. The cloying smell of death and spent cartridges was all pervading. I shouldered the rifle, the barrel still hot to the touch, and moved away as large trucks rumbled in to load the carcasses. The staccato percussion of the chopper faded overhead and I was left with my own misery. I recalled a story that the late white hunter Mike McRay Milton had told me. He had guided the famous cowboy actor John Wayne on his first elephant hunt in what was then Portuguese East Africa (Mozambique) in the 1950’s. Mike had said that John Wayne was as tough as his movies…tireless, resolute and uncomplaining…he took all the discomfort that Africa could dish out with a smile. After miles of tsetse fly infested bush they closed with an enormous tusker and John Wayne took its life. Mike recounted to me how Mr. Wayne had asked for privacy and for over an hour, sat alongside the fallen beast and wept as a great and aching sense of loss consumed him.

It is an enigma indeed. I don’t know the answer constant reader. I know that this majestic animal must be conserved along with the habitats that sustain it and the myriad other intricately woven and connected elements of Africa’s natural landscape. I know that to succeed we must involve rural African communities and their needs and desires and we must at all times hold ourselves accountable. Africa without the elephant does not bare thinking about…it would be an abomination.

This site uses cookies. By continuing to browse the site, you are agreeing to our use of cookies.

We may request cookies to be set on your device. We use cookies to let us know when you visit our websites, how you interact with us, to enrich your user experience, and to customize your relationship with our website.

Click on the different category headings to find out more. You can also change some of your preferences. Note that blocking some types of cookies may impact your experience on our websites and the services we are able to offer.

These cookies are strictly necessary to provide you with services available through our website and to use some of its features.

Because these cookies are strictly necessary to deliver the website, refuseing them will have impact how our site functions. You always can block or delete cookies by changing your browser settings and force blocking all cookies on this website. But this will always prompt you to accept/refuse cookies when revisiting our site.

We fully respect if you want to refuse cookies but to avoid asking you again and again kindly allow us to store a cookie for that. You are free to opt out any time or opt in for other cookies to get a better experience. If you refuse cookies we will remove all set cookies in our domain.

We provide you with a list of stored cookies on your computer in our domain so you can check what we stored. Due to security reasons we are not able to show or modify cookies from other domains. You can check these in your browser security settings.

We also use different external services like Google Webfonts, Google Maps, and external Video providers. Since these providers may collect personal data like your IP address we allow you to block them here. Please be aware that this might heavily reduce the functionality and appearance of our site. Changes will take effect once you reload the page.