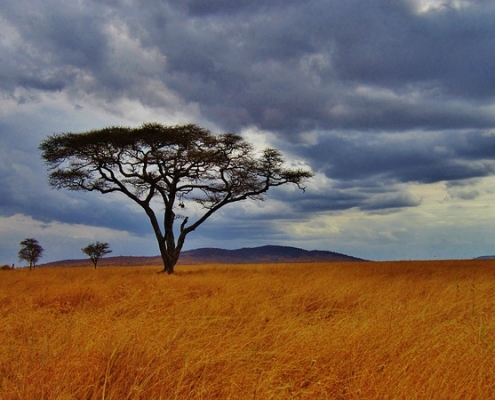 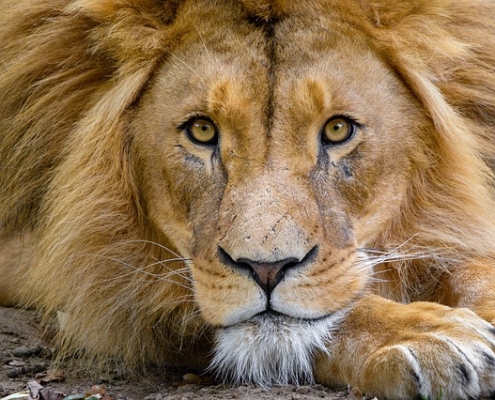 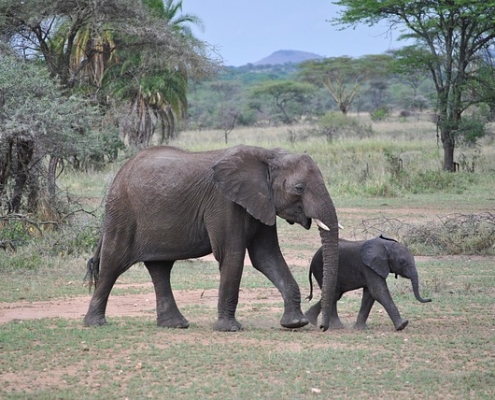 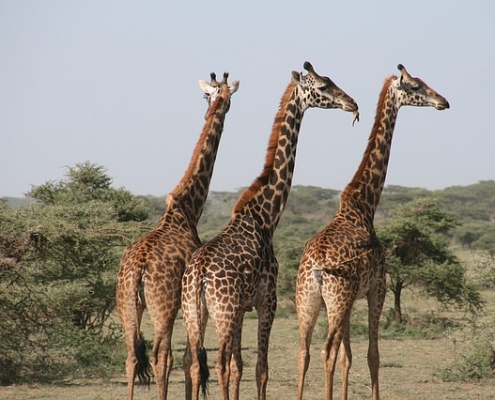 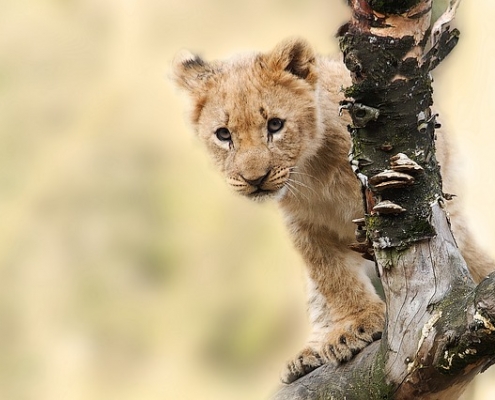 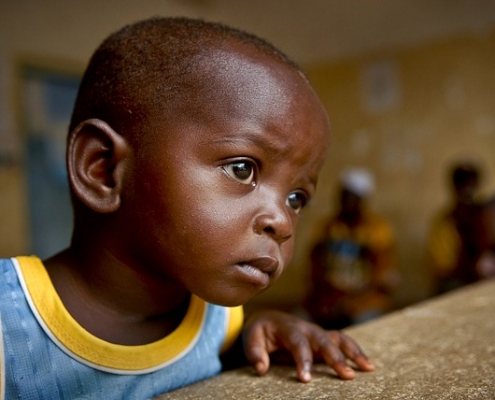 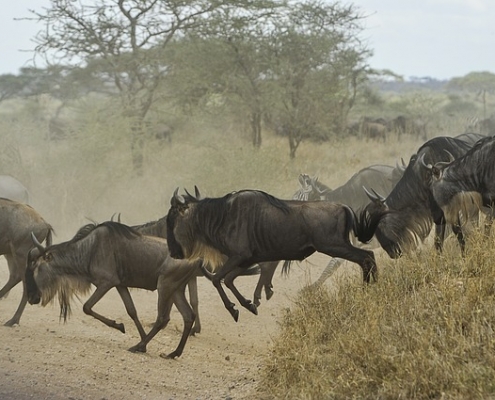 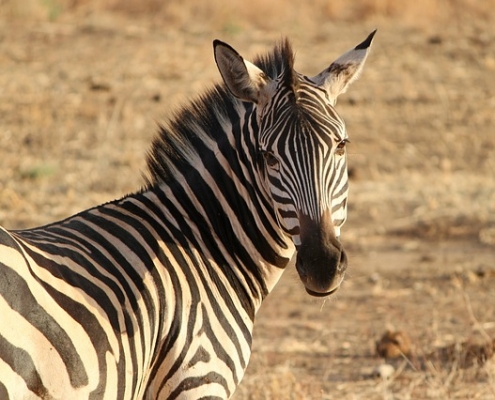 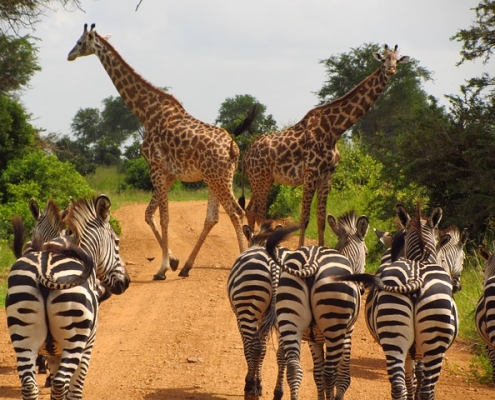 Arriving at the Kilimanjaro International Airport in the shadow of the great mountain we will be transferred to the beautiful and tranquil surroundings of the Rivertrees Country Inn.

Both the Lodge and the Sanctuary were established in 1959 and remains in family hands till today. The Sanctuary is home to zebra, ostrich, a wide array of birds and monkeys, including the elusive Colobus monkey. Surrounded by exotic bird calls and indigenous forest, the lodge is an ideal base to unwind after your night and prepare for the adventure ahead.

After breakfast drive north toward Tarangire to explore the evocative savannah landscapes of this National Park for a game drive and picnic lunch in a baobab filled wonderland.

One of the lesser-known game reserves in Tanzania, Tarangire rivals the Serengeti in its great number and diversity of wildlife. It is a good choice for travellers who wish to encounter more animals and less tourists while on safari. The Tarangire National Park is known as a wonderful birding destination and also features large numbers of game. The landscape is of particular interest too, due to the high number of baobab trees and its enormous herds of elephant. An often-overlooked gem, Tarangire’s characteristic skyline, framed by the stubby branches of fat baobab trees, is the backdrop for superb game viewing. Lion and other predators are frequently spotted. The park boasts over 500 species of birds, including some species endemic to Tanzania. We end off the day with dinner at Burunge Tented Lodge, where we will spend the night.

After breakfast, drive to Lake Manyara National Park which offers a wilderness experience in diverse habitats, from its Rift Valley soda lake to dense woodlands and steep mountainsides. Apart from a spectacular setting, the park is famous for its unusual tree-climbing lions and the vast elephant herds it was established to protect.

The shores of the lake, encrusted with pink flamingo, attract more than 400 species of birds, many of them waterfowl or migrants. Large herds of buffalo, cheetah, Masaigiraffe and impala roam the lake shores and the forested valley slopes. A Lake Manyarasafari is a fascinating experience, as the park also features a ground-water forest, acacia tortilis woodland and hot springs called Maji Moto. Troops of several hundred Olive baboon appear alongside Sykes monkey and short-eared Galago. Cape clawless otter, Egyptian mongoose, Hippo and Klipspringer are other park residents. We spend a night in a coffee plantation on the slopes of the Ngorongoro Crater at the Ngorongoro Farm House.

After breakfast we depart for a drive around the cloud shrouded rim of the Ngorogoro Crater, followed by a descent onto the endless of plains of the Serengeti. With a name that means ‘endless plains’ in the Maa language, the Serengeti National Park, a UNESCO World Heritage Site, stretches along a vast plateau between the eastern arm of the rugged Rift Valley and the huge expanse of Lake Victoria. The park covers an immense 1.5 million hectares. The park is famous for its vast, open grasslands, which allow for excellent sightings of abundant wildlife. Tanzania’s oldest game reserve, it is also one of the oldest ecosystems on earth and its climate and vegetation have remained largely unchanged for millions of years. While the Serengeti boasts incredible numbers of resident wildlife, it is perhaps best known as the site of the annual Great Migration, when an estimated three million antelope –mostly wildebeest —migrate to Kenya’s Masai Mara Game Reserve. One of the greatest spectacles in the natural world, the migration follows the seasonal rains, spending the wet season on the south eastern plains of the Serengeti and the dry season in the woodlands of south western Kenya. Between January and March the wildebeest give birth on the short grass plains of the south eastern Serengeti. This time of year attracts a vast plethora of predators, from lion to hyena, leopard and cheetah. As the grazing runs low in this area the wildebeest move to the central Serengeti and then the Western Corridor before crossing the Grumeti and Mara Rivers on their journey north toward Kenya. Here the horizon fills with the dust of millions of hooves and the timeless drama of predator and prey

This morning we ascend the rift valley escarpment and descend into the lost world of the Ngorogoro Crater.

The Ngorongoro Crater, once a gigantic volcano, is the largest intact caldera in the world. Some maintain that before it erupted, it would have been higher than Mt Kilimanjaro, the highest peak in Africa. Today the nearly three million year old ancient caldera shelters one of the most beautiful wildlife havens on earth.

Lean Maasai, resplendent in their beads and furled in scarlet shuka robes, tend their herds on the crater rim. A burbling spring and a large soda lake quench the thirst of the crater’s inhabitants. Black rhino are protected within the crater rim, giant tusked elephant wander the forests, black-maned lion stalk the grasslands and flamingos crowd the soda lakes. An estimated 25 000 large mammals are resident in this bowl of plenty, including a large population of lion. Cheetah move in and out of the crater, while leopard are most often encountered in the spectacular Lerai Forest. Among the smaller carnivores, both golden and black-backed jackal are abundant, while the normally shy and nocturnal serval are frequently seen during daylight hours. Vast numbers of buffalo, zebra and Thomson’s gazelle can be seen grazing the crater floor. After spending the day exploring this wonderland we will overnight back at the Ngorogoro Farm House. After breakfast the following day we will return to Arusha for your departure flight.

This site uses cookies. By continuing to browse the site, you are agreeing to our use of cookies.

We may request cookies to be set on your device. We use cookies to let us know when you visit our websites, how you interact with us, to enrich your user experience, and to customize your relationship with our website.

Click on the different category headings to find out more. You can also change some of your preferences. Note that blocking some types of cookies may impact your experience on our websites and the services we are able to offer.

These cookies are strictly necessary to provide you with services available through our website and to use some of its features.

Because these cookies are strictly necessary to deliver the website, refuseing them will have impact how our site functions. You always can block or delete cookies by changing your browser settings and force blocking all cookies on this website. But this will always prompt you to accept/refuse cookies when revisiting our site.

We fully respect if you want to refuse cookies but to avoid asking you again and again kindly allow us to store a cookie for that. You are free to opt out any time or opt in for other cookies to get a better experience. If you refuse cookies we will remove all set cookies in our domain.

We provide you with a list of stored cookies on your computer in our domain so you can check what we stored. Due to security reasons we are not able to show or modify cookies from other domains. You can check these in your browser security settings.

We also use different external services like Google Webfonts, Google Maps, and external Video providers. Since these providers may collect personal data like your IP address we allow you to block them here. Please be aware that this might heavily reduce the functionality and appearance of our site. Changes will take effect once you reload the page.